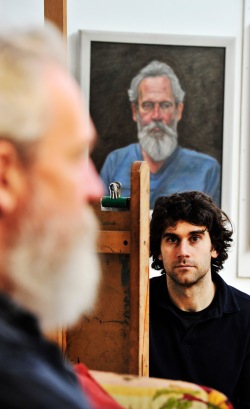 Francis O’Neill is an award-winning portrait artist based in Oxford, specialising in figures and landscapes in oils, pencil, charcoal and pastels. He teaches drawing and painting from his studio in Oxford. https://francisoneill.net/wordpress/index.php/life-drawing-oxford/

Francis graduated from Edinburgh College of Art in 2000. In 2003 he won a scholarship from the Salford Sports and Arts Trust before becoming Artist in Residence, first at Chenderit School in Banbury in 2003-4, and then at St.Mary’s School in Wantage 2004-05 where he then became Figure Drawing Tutor. The experience of these residencies led to Francis writing and presenting the television pilot “What’s so great about Turner?” In 2006 Francis won the Elizabeth Greenshields Award, a worldwide prize for figurative painting.

In 2008, Francis’s independent one-man exhibition, The Binsey Collection, also saw the launch of his gift book The Stick Man’s Guide to Life and Art. In 2009 he was elected to be a member of Magdalen Road Studios http://www.magdalenroadstudios.com/ and in 2013 his work was selected for exhibition by the Royal Institute of Oil Painters.

Francis has taught figure-drawing at Ruskin, Trinity and Magdalen Colleges and currently teaches at St. John’s, and Pembroke Colleges, at the University of Oxford, after starting teaching at Manchester Metropolitan University. He has travelled the world studying and making art, visiting major national galleries throughout Europe and beyond.

These studies led to Francis researching the the practices of Old Master artists. This began with an exploration of paint-making techniques and led to a foray into optics. Following on from David Hockney’s work on the subject, Francis showed that it was possible for artists to make self-portrait projections that they could use to create their art works. This had not been previously thought possible. Francis’s research was published in the Institute of Physics, Journal of Optics in 2016 and reached a worldwide audience.